nzlockie (PRO)
Hello and welcome again to another exciting Edeb8! As always I thank my opponent for his participation and the Judges for their time and consideration!
Today's debate is an important one - not only for the immediate issue at hand, but also for the ideological president this issue presents.
DEFINITIONS:
Development Assistance - is defined as "Government Aid designed to promote the economic development and welfare of developing countries" The full detailed definition can be found here.
Prioritized - is defined as "consider this more important than that", with the contextual inference that problems should be dealt with utilising Development Assistance before resorting to Military aid. It should be noted that we are not EXCLUDING the possibility of Military Aid, but as this is diametrically opposed to the concept of Development Assistance, it'll be our position that this would only be utilised as a last resort.

Military Aid - is defined as being "aid related to assisting a country to defend its territory using martial force". It could take the form of dedicated spending, military arms, or physical troops on the ground from the donor country.
The Sahel region of Africa - is defined as the string of countries which create the border of the Sahara Desert in the North and more fertile areas of Africa to the South. These countries are illustrated and listed here in this lovely map: 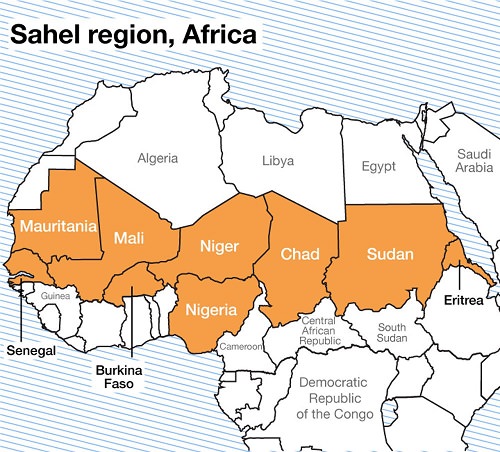 In plain english, we will be arguing that any country wishing to donate foreign aid to the countries of the Sahel region in Africa should focus their efforts towards directly addressing the issues around economic and domestic welfare rather than escalating existing tensions by playing Rambo in the desert.

CONFLICT IS BAD:
I'll make this one a short point. If my opponent wishes to dispute it, then I'll expound on it in later rounds.
Essentially, the proposition is that armed conflict is net-detrimental for all parties concerned.
As long as Armed conflict is used to resolve differences in the Sahel, it will be difficult for progress to happen.
I believe that both parties in this debate will agree on this point, and that the goal of ANY aid to this region, regardless of the type will be to bring an end to this conflict.
CONFLICT RESOLUTION 101:
There's no argument that the countries and tribal groups which comprise the Sahel region are in conflict.
On the surface of it, there are many reasons cited for this conflict; Religion, Territory, historic Tribal animosity, but ultimately, it's our belief that these reasons all pale in significance beside one: Resources.
Simply put, resources are incredibly hard come-by in this region, and life here is very difficult.

The climate in the Sahel is Arid, and worryingly, getting more so, as the Sahara desert continues to expand. Many of the people groups found in this region don't have a history of survival in conditions such as they are experiencing in modern times, and are not equipped to adapt easily.
It's pretty clear that as times get tougher, tensions go up, and armed conflict is not far behind.

The real question here is how we can address this conflict from a Global perspective.
Interestingly the subject of Conflict resolution has been well documented. I did a bunch of research on this subject and almost ALL theories can be boiled down to the same steps:

1. Identify the source of the Conflict.
2. Look beyond the Incident.
3. Request Solutions.
4. Identify a "Best Compromise" solution.
5. Agree on the Solution.
At no point was it recommended that the Mediator, (Donor Country in our situation) should step in and actively encourage the fighting.
Instead, by removing the source of conflict, you remove the major impetus for the conflict.

If welfare and quality of life are the primary reasons for conflict in the Sahel, then we can most efficiently resolve this by addressing THOSE concerns directly.

THE DANGERS OF PICKING A SIDE:
One of the major reason for foreign nations to resist the urge to use Military Aid as a means of improving things in the Sahel is that history has taught us that this has a tendency to backfire.
Foreign nations have a poor track record of establishing who is "right" in any given situation. They tend to focus in on the existing problem, the surface reason for the conflict, ignoring the second step of Conflict Resolution, to look beyond the incident.
The truth is that governments are not equipped to make these kinds of calls - Especially not governments like the two major Military super powers, USA and China, neither of whom have any established history in this region.

Even when choosing the RIGHT side, this kind of conflict resolution has never been shown to successfully eliminate the "Evil" element. Rather, it just forces it underground, creating Martyrs of the fallen and prompting years and generations of unrest and tenison, which frequently displays as Terrorism and Violence.

Finally, in instances where foreign governments support different sides of the conflict, this kind of aid can actually end up prolonging the conflict rather than resolving it. Vietnam and Korea are both modern examples of this.
In the instance of the Sahel, this may well be the case as foreign nations are divided on who to support in some conflicts, especially those fought on Religious or Political grounds.
The fact is that deciding which side deserves military aid is incredibly difficult, does not address the underlying problem and even when we get the right side, does not provide a long term solution.
IT IS MORE EXPENSIVE
I don't think that my opponent will contest this point either, so I'll save my character count on this one until later in the debate.

The US Government spent $141 BILLION 1960's dollars on the 14 years spent waging the Vietnam War - which they ultimately lost.
As this article points out, that equates to about $7000 for each of the people they were defending.

After the US had been defeated, they left behind them a war torn country to the extent that they are still clearing landmines from it today, almost 50 years later.

It is much more efficient to simply donate Aid which directly improves the livelihood of the prospective combatants and removes the incentive for conflict altogether.
THE BIG PICTURE
Essentially the Countries and people groups which comprise the Sahel region have a big problem that needs addressing. The Sahara is expanding and life is getting harder. 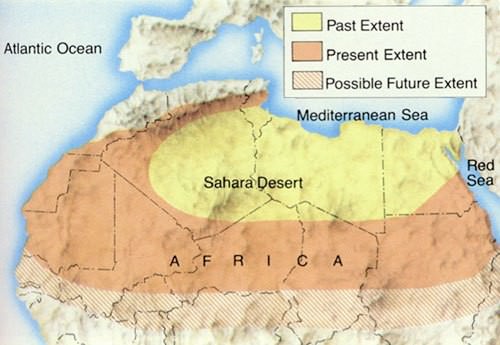 As this image shows, the problem that exists today is only going to get bigger as time progresses. Conflicts over resources will be escalating, not diminishing - unless something can be done about it. There are lots of theories and scientists willing to work on this issue, but they can't while conflict in this region rages.

The best thing Foreign Governments can do is to provide aid which will remove the REASON for conflict.

Some debates are tricky to vote on guys - this one isn't.
Vote PRO!
Return To Top | Posted: | Speak Round

There are no judgements yet on this debate.

Rules of the debate